You Are Here Home » My Life » Family » Blessed

Well the Christmas celebrations are almost done and we’ve survived! Full of love, laughter and tears it was amazing for our little family. While at times I missed the glow which a wonderful glass of red wine brings I didn’t miss the sluggish, painful Christmas morning wake up, the shame or the bruises from falling down or bumping into who knows what.
This year we had 2 sick girls and we were up for 4 nights tending to them. This was tiring but also gave the opportunity for time with them in my arms to reflect on their wonderful little lives. How much they’ve experienced, the love they’ve felt and prayer for many more such times for them.
Christmas Eve I was sitting with Sydney (eldest) listening to Christmas Shoes on the radio which always makes me cry and she began SOBBING! She said “I’m so glad you didn’t die in your car accident” WOW
This little 6 year old has been giving hints at being constantly worried about me but man this hit hard. We cried together and then chatted about the fact that I’m alive by the Grace of God and that we must be thankful for all the time he allows us here before we go Home.
Did I mention that hubby thought this was a great time for a photo?
Christmas morning was hilarious, hubby in one daughter’s bed and me with the other (romance was dead to say the least). 7am and hubby and I were waking them….that was a trip! Then we loaded the breakfast in the oven, got a cup of coffee and expected them to dive into the presents. NOPE. The littlest just stood with huge eyes staring at the gifts and the oldest just layed on the couch. hmmmm where’s the lively girls we know??
So we helped it along and soon enough they got it! 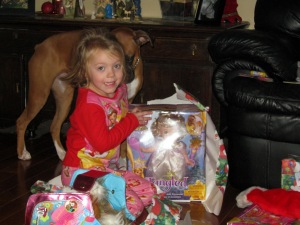 My youngest Chelsea sporting her “oh my gosh it’s the Tangled “Bapunzle” baby!!”

Here is our eldest Sydney performing what we are now referring to as the “recline” pose of unwrapping gifts.
We then went on to Christmas Brunch at my sister and brother-in-law’s house with my folks and it was a BLAST! We had fantastic food and even played Taboo, have you played this game? If not go get it, serious fun and even a buzzer to annoy the other team with….as my brother in law found.
I took the chance to snap this sweet shot of Chelsea while we were there.
In closing this blog I’ll say that I may have physical limitations, memory and processing issues, be an alcoholic but as my daughter told me:
God made me AMAZING, just like I am.
Blessed indeed.