You Are Here Home » Sober doesn't Suck! » Alcoholism » The Grace of God

I’m thinking to begin posting about my early sobriety before I forget the experience. My intent for this blog is to jot down my thoughts because these days they fall away from my memory. I love the blogs with humor about sobriety because it’s not all been misery, in fact, spiritually it’s been an amazingly loving, wonderful journey so far.

SO a bit about my history would be an appropriate place to begin. I was born a super cute lil thing to a British Mum and Dad who lived here in Canada, I have one sister who is AMAZING, you know the type of sisters where one follows the other around constantly annoying the other trying to be like her? That was us errr okay it was me. Great childhood, involved with sports, school, community and church.
As I said in my earlier post I felt “less than” within my own self and unless I was able to appear to be accomplished at something I rarely participated in it. I did well in school easily, same with sports and friends generally.
I cannot remember my first drink, my folks enjoyed beer and wine so it was commonly around our home, not like I was drunk on a Saturday night at 5 or anything but I’m certain I’d tasted beer at home young because I knew it tasted like funk before I recall drinking it. I also remember despising doing communion at our church because the wine tasted horrific (budding palate?)

In grade 7 a bunch of us kids were at my friends house and decided to steal a drink out of her Mom’s Texas Mickey of hooch. Seriously this was a HUGE (like to my waist) bottle with a pump top that her Mom refilled with something she made (I specifically remember her using panty hose to strain something which she boiled on the stove). So we get the cup and took turns. It burned like a MOFO!! I hated it ….and yet I had more than one because everyone else was.

Fast forward to years later and I was drinking with my Sister and her friends (she totally didn’t want me to cuz I was only 16)  it was Singapore Sling out of a tupperware juice container and we were playing Molsons poker. Do you see where this is going? Yup drunk, blottoed…gross and puking in the bathroom an hour later. So again wanting to “fit in” I had an aversion to booze.

I must say at this point I do have a tenacious streak which has served me well in business and other challenges and ultimately in my dumbass quest to become an accomplished connoisseur.

Off we go to my late teens – didn’t bother drinking much, I was usually the DD.

I’m not sure why but in my early 20’s I began to drink regularly. LIKE A SAILOR. I took pride in the fact that I could drink with the “big boys” and leave ’em in the dust. Thursday – Saturday nights were drunkfests, when most people were making memories I was blacking out. I had a great job, great family and all were well on these fronts…in my mind at the time it was normal for the youth to party like this.

I went to college again at 23 and didn’t really do the drinking thing because I commuted but Saturday nights are all a blur. Actually to be fair I was working 3 jobs and school so didn’t have much time but when I did…yup no holds barred. I think I had created a habit for myself of living my lives in different boxes, student, employee, sister, friend, daughter, party girl and never shall the two meet.

During my early to mid twenties I dated alot, made poor choices outside of work/school and led a really fast lifestyle. Clubs, parties….anything that was offered I spontaneously did. By my late 20’s I met who was to be my future husband. I got my first “real” career job and life was good. I remember feeling loved by someone other than family for the first time and my joy was huge because I loved him too. (let’s save that story of this wicked awesome guy for another blog)

Fast forward again to recent years…I was a Mom who worked, commuted and was often overwhelmed with the feeling that I wasn’t your typical June Cleaver which I strived to be. I compared myself to those other women who did it with seeming ease.

You know the ladies, the ones who are totally comfortable at the Early Years Centers, those who remember to bring snacks, clean clothes, are fully made up in their Lululemon yoga suits with their already tight abs and chatting over a coffee?? I was the Mum who ran out 20 minutes late with the diaper bag that I forgot to restock, not showered in a few days, frazzled, dying for a coffee or perhaps something to eat for the first time in DAYS ….but I made it to the bloody Early Years Center so my 6 month old daughter could “play” and “socialize” with other babies??????

Why didn’t someone slap me?

So this caught up with me….a glass of Shiraz on a Friday night bled over time into a bottle. My husband loved the gregarious wife who had come back to him on Friday nights, I was carefree again for a few hours, witty, fun, SEXY!! Then on Saturday evenings we always had plans with friends which meant wine for me, beer for the men (hubby has always been a 1 or 2 beers guy) and of course for a GREAT night it was shots of Patrone! Oh and I was a total snot with alcohol, it was so important to me that it be “quality” booze until later when boxed wine and buck a bottle beer worked too, heck I even drank sweet white wine my parents friends gave them for Christmas when I was in a pinch.

So Sunday to Thursday I waited (without realizing) for feeling like myself again on Friday and Saturday. I loved my daughters and enjoyed them totally but ultimately felt like I wasn’t the best Mum God could have chosen for them. I beat myself constantly with my internal thoughts as we women are apt to do. I got fit, jogging 4K/day with a wonderful friend of mine and felt great about surface things.

This drinking had begun to take a turn, I could be fun tipsy Julie and suddenly for no apparent reason to those around me become Mean Nasty Drunk Julie. It was totally unpredictable by the number of drinks or type. Frankly I didn’t remember most of it. Black outs were common for me.

I refuse to do a drunkalog so let’s say that this continued for quite a while, sometimes it was a lucky night with Awesome Party Girl Julie and sometimes Drunk Julie came out. I got sick of feeling the shame of waking. There is nothing like being afraid to open your eyes and look to see the mood of the ones you loved the most to know what you did.

The time came after just another Drunk Julie night when I’d had enough. I told hubby (not for the first time) that I was done with drinking. That I had to admit I needed help and that I needed GOD. I had known for a long time that I had an issue, that I abused alcohol and didn’t know why. I also knew that the day I quit I would be changing my entire life, way of thinking and truly giving it all up….all of my wants/desires and dedicating my life to God and His will.

FRIGHTENING doesn’t cover it. I was terrified to face a LIFEtime surrounded by alcohol and not being able to imbibe. I would be excluding myself FOREVER.

So this was it, I couldn’t ignore it anymore. There was no more space within me to stuff down the emotions. I got on my knees totally devastated and prayed to God. I gave him my life, confessed my sins of which I could face/remember and begged that he fill me with His Holy Spirit. That he take my life and guide me. That’s it. I had no more words but God knew what was in my heart.

From that moment, broken as I was, God has used me. He led me to a meeting, gave me the strength to walk in the doors and I’ve been relieved of the need to drink. 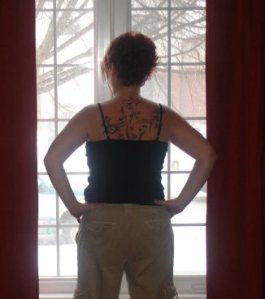 I am SoberJulie and today I’m Grateful by the Grace of God he is using me for His purpose and I feel at home.