You Are Here Home » Sober doesn't Suck! » Alcoholism » If Shame Was My Illness, Then Love Was The Antidote

Today I’m honored to have an inspiring woman sharing her story of alcoholism with us. Schmutzie is a writer and designer who has been blogging at Schmutzie.com since 2003….enjoy her piece here and then head on over to her blog and experience her intriguing mind at work! 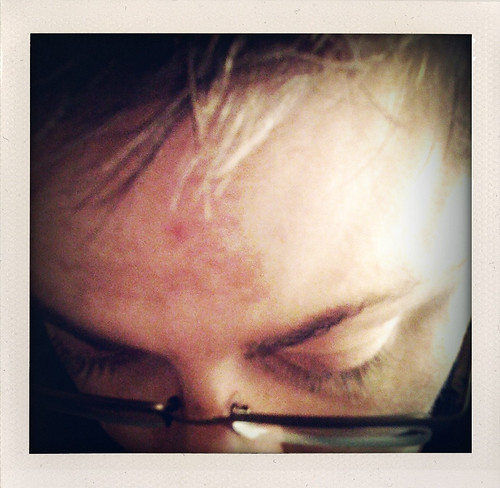 Almost four years ago, in the summer of 2008, I started giving serious thought to the role of shame in my life.

I had a desk job in a beige cubicle in an unfriendly office. It was so inhospitable to me that I could no longer watch television shows about the lives of quirky office mates or crime dramas in which police officers butted up against their stern superiors. Even watching fictional portrayals of work life sent a familiar, stomach-clenching burn up the back of my neck. I was like Pavlov’s dog, except instead of salivating at the sound of a bell I was trained to feel shame at the site of office supplies.

I ended up burning out and waiting out the shame at home in my living room for an entire year. The shame didn’t seem to be going anywhere, though, and it dawned on me that I had been living with a near constant sense of it for most of my life. This latest dollop of the stuff was born of abuse and ugly personalities, for sure, but it was not a first. I looked back down the telescope of my life, and there shame was at nearly every stage. It was a common denominator for most of my struggles, and when I looked around for what I could do to combat it, I realized that my best tool for fighting it was something I had very little of for myself: love.

If shame was my illness, then love was the antidote.

I didn’t know how to work love to my advantage, being that I had spent so many years under the cover of self-loathing, so I decided that my best plan of action was to ferret out whatever created the shame in my life and get rid of it so that there could at least be more room for love, however that might manifest itself.

I officially quit the job that had crushed me, and I felt free and bold, but once the foufera about that had settled down, I essentially felt the same. I looked deeper into my life and had to admit that there was a lot more shame there than that one job could hold. I looked at what triggered it and how I dealt with it when it rose up, and I hated what I saw.

Everything, it seemed, triggered my shame. Family dinners, waking up in the morning, going to bed, going out with friends, eating, leaving the house. Everything triggered it, because I realized that I had been dealing with my shame the same single way for almost twenty years at that point: I got drunk.

I drank alcohol to unwind and to forget. I drank it to erase that terrible burning I felt so often up the back of my neck. I drank it so often that when I wasn’t drunk I was either hungover or waiting for the next opportunity to drink. It was such a prevalent force in my life that it was insinuated into every decision, every movement I made.

Alcohol was no longer the medication to assuage my shame but was now the main source of that shame. I no longer chose things for myself. Alcohol did. Alcohol dictated my friendships, my work choices, my poor diet, and then it wrapped me up in warmth and forgetfulness when those choices came to bear. It was obvious that if I was going to remove shame and find more love, I was going to have to remove alcohol from my life.

I didn’t want to fully admit that, though. Admitting that meant admitting my own culpability, and I didn’t know how to take responsibility for over twenty years of my life. It was too much. It felt impossible.

It ended up being another year before I walked away from drinking in August of 2010. I watched my friendships, my sleep patterns, my eating habits, and my thoughts over year leading up to my taking on sobriety, and could finally see how very sad I was, how soul-deep sick drinking was making me. I had followed the shame, and it brought me home to what I did not want to see. Alcoholism had turned me into my own little shame factory. In choosing it, I also chose the things that drove me to it.

That day when I finally stood up from my table at a local pub and walked away from alcohol, I knew that I was walking away from shame fed by addiction, the snake that had been eating its own tail for over twenty years. I didn’t know how to love my life, but I knew how to lose a large chunk of my shame. I walked into sobriety, I made room for love, and I began to heal my life.