How fitting that the Windows 8 party in Toronto was held on the eve that Hurricane Sandy rolled in.  If Toronto was Windows 7, then Sandy brought with her the “Frankenstorm” of Windows 8!  No, I am not saying that Windows 8 is Frankenstein, but it is radically different than its predecessor.
When I first saw Windows 8 across a crowded room, what appeared to me was a desktop of very colorful squares.  I glided over to the computer screen to interact with the system, and immediately learned that the keyboard was not the main way to navigate with Windows 8.  Wow, I thought, this Windows 8 laptop is a touch screen interface!  And once I learned that little trick, the computer and I were as one.
I thought about my Windows 7 laptop at home, and pondered how Windows 8 had greatly departed from that previous version.  Specifically, Windows 8 is all visual: photos telling you where to press, with smaller fonted text labeling each selection.  This is what Microsoft calls “Live Tiles”.  I do have a tablet at home, so I am used to this type of interface, but have to admit it was a new experience when engaging a laptop.
So, what kinds of colorful, square and rectangular visual boxes were displayed on the homepage, you may ask?  Part of the visual layout included e-mail, Facebook, a day planner, weather, maps, Internet Explorer, SkyDrive, Bing, Xbox and more.  I will get to the last two shortly, but you can personalize the homepage with best fit choices such as eBay, your favourite blogs, The Huffington Post, etc.
The fact that Bing was integrated into Windows 8 was a great surprise to me.  Bing is like a search engine crash landing into Pinterest, with the latest news presented in a highly visual, pictorial fashion.  I think that Bing will be one of the most popular features of Windows 8.  And again, when you do a search for the latest news on Bing, it appears in those Windows 8 visual squares and rectangles.  But the information appears from left to right, rather than from top to bottom, like most browsers.
Noteworthy, the Windows 8 Tablet can remotely control the Xbox, with a free app that can be downloaded online.  I have to say that at the Windows 8 party, this created quite a stir among gamers and gawkers alike!  In a nutshell, a device like a Windows 8 Tablet is integrated into the Xbox game play, currently as a GPS-driven map.  An Xbox controller is still necessary for game play, which I found a bit erroneous, but the integration of Windows 8/Xbox is a step in the right direction! 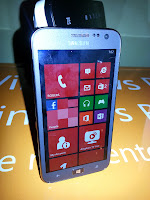 The Windows Phone 8 was very consistent with the look and feel of the Windows 8 laptop.  Very visual and pictorial, with the same square and rectangular boxes that Microsoft calls “Live Tiles”.  It had a very intuitive feel to it, and it had cool features like the Rogers Anyplace TV Live app, which plays live games like sports and real-time news.  (The Windows 8 Tablet also has Rogers Anyplace TV on Demand, which includes a broader choice of channels such as Citytv, TVO Kids, HGTV Canada, etc.)
The Rogers One Number  feature on the Windows Phone 8 was also very neat, as you can talk, text, send picture messages and video chat with other Rogers One Number users, using your existing wireless phone number.  I liked that this feature does not deduct minutes from your wireless plan.  I also liked that with One Number you can switch calls seamlessly between the Windows Phone 8 and Tablet, as well as permanently block out annoying numbers.
I’m glad that I had the chance to see how different Windows 8 is to its distant cousin Windows 7.  If you’re considering a laptop, tablet or smart phone, you should strongly consider Windows 8 if you want to stay on the cutting edge of technology.  I know that I will be considering Windows 8 when I make a laptop purchase later this November.
~~~~~~~~~~~~~~
Jenna Em is a writer for the Huffington Post, blogger at www.snymed.blogspot.ca and mom to 5 great kids, 7 years and under.  Follow her on Twitter @SnyMed!